We're ALL examples. We assume if we're not in front of a crowd, a captive audience or a tv camera, we're off the hook, but ultimately the greatest examples are the ones under our own roof, and inevitably, that includes us all.

Dad was a depression-era kid who, along with three brothers, grew up knowing how to hunt. They not only ate what they killed but they learned to skin and sell pelts for survival. Therefore, Pop grew up fairly tough and self-sufficient .Life was just what it was, and that included accepting some pretty brutal hardships as a simple fact of life. 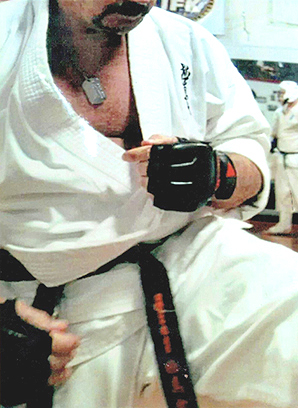 Years later, the Weber family broke into the dairy business. Breaking in new cows unaccustomed to stalls and milking machines was actually a fairly dangerous livelihood, but again, it was simply a part of the process. I remember dozens of times over the years Dad coming to the breakfast table with his half-lit cigarette, sipping his coffee with hoof-shaped gashes on his wrists and forearms, many times close to the bone. What should've been deemed emergency room-worthy was never a consideration in Pop's eyes. As a kid I couldn't help but wonder at times if lacerations from lightning-quick hooves even registered on his pain meter. I know it did. Did it keep Dad from continuing to break in new heifers whose time had come to learn what confinement in a small stall was all about? Not hardly.

Therefore, as a kid, I simply lived in a world where I learned to suck it up. Honestly, today's standards would have deemed much of it as child abuse. I know now my dad loved me and was trying to toughen me up for an even tougher world. One thing that did develop from a very early age, and is obviously prevalent even in my "senior" years today is a markedly high tolerance for pain. Am I saying it makes me a better teacher than anyone else? Grow up. What I am saying is I believe the best teachers, mentors and examples in the things of life, including the martial arts, are those who have bled. Preferably not physically, but they've taken shots and overcome hardships over the years that have set them apart from those whose only schooling was a sterile classroom or sucking their way up in their small-world food chain.

If pain does come my way these days, it's either by accident or DNA. But I've learned if it comes, and it will, whether it be an emotional hit or a simple reminder that this earth suit is simply one moment closer to a pain-free eternity, it can be a great teacher if I simply learn to embrace it for a while and stop trying to figure out why it's me.

The most trustworthy man I've ever met regarding things of the spirit said recently," It's expensive to be effective." My paraphrase is:

Having a story to tell, especially leading by example, comes with a price.

You don't have to fall on a sword to be a good leader. But many trials will come. And in this culture of politically-correct, self-entitled primadonna snowflakes, we need examples of simply good people who will stand above the stagnation of mediocrity permeating our society today. Am I advocating self-inflicted pain? Hell no. Trust me' there will be plenty of antagonists who will constantly be shoving your history and your past in your face enough so you won't have to.

C.S. Lewis said," This world is a great sculpture's shop and we are the statues. But there is a rumor going around the shop that some of us are someday going to come to life."

To my outspoken critics, thanks for the free advertising. I may be hobbling up to the finish line but your whispers of conjecture and berating hisses are being drowned out by the roars and applause of those who gained from my experience. They're those who don't let their tee-shirts, tattoos or stripes on a belt do their talking for them or define who they are.

The next-gen of standup is here. A few good people have more than paid their dues so the many won't have to.

Vanguard Standup Federation. It's not just coming to life but slowly gaining great momentum. The tip of the spear is creating quite a stir in the land of un-opposed giants.

And those giants are the real underdog.