Editorial August 2016
In light of the turmoil and upheaval that permeates every cubic inch of our atmosphere these days, one thing is apparent - lines are being drawn politically and socially and regardless of which side you stand on, choices are being made that will resonate for generations to come, not only nationally but individually as well.
Not everyone can be right, but it is my estimation that one choice EVERYONE can make for themselves that there'll be no regrets is the choice to simply take better care of themselves spiritually, emotionally, and if at all possible, physically. 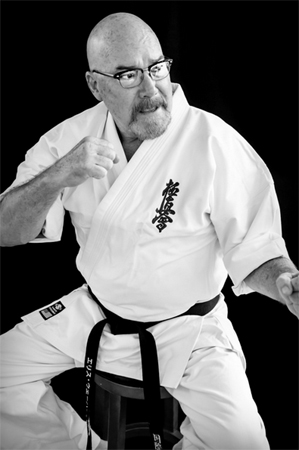 In the last 45 years or so, I have officiated at dozens of funerals and memorial services. Having been given the opportunity to be with many of those precious  souls in their last moments on earth,  guess where their deepest regret lay?  Not in having not obtained the proverbial bucket list of exotic trips, restored relationships,  or bull riding. But had they simply taken better care of themselves in the simple everyday opportunities to exercise more regularly and limit those addictive appetites and behaviors, the bucket list would have been a doable reality. Sadly, too many found out only too late that if they don't have their health- if they don't feel good, virtually nothing else matters.

Speaking on a personal  level, I have had nearly two decades of numerous surgeries that have been a result of auto-immune and arthritic prognoses that  have attacked, of all areas that didn't need attacking, my joints and muscle groups. It's been a true karate instructor's nightmare. But two of my favorite surgeons will be the first to validate that had it not been for my years of training I would most likely be in a wheelchair or hospital bed. I believe I would be in a grave, but that's another editorial. Anyway my point is this:

I believe in what I teach. I will never be able to be one of those guys who watches a video and then becomes an expert, let alone a 'MASTER'. My old school ways have kept my classes a bit smaller than I would prefer, but I am able to sleep at night knowing my students have not just earned a new technique but a lifestyle that they can embrace for the rest of their natural lives.

Anyone, kids or adults, can train in real Kyokushin, but most will not because the choice was made to take the easy road. And I will be the first to say that we're not necessarily better than any other system, and I, obviously, will never boast that I am a better instructor than anyone else.

But I do know this one thing ;
I am better than I used to be . I attribute all that to God, and I am  thankful He chose to use the avenue of Kyokushin to get me there. And trust me-- what Kyokushin has done for me and millions of others is available to you as well. It's a line drawn in the sand  you'll never regret stepping over.
Osu .
Shihan Ellis Weber
Founder and Senior  instructor
Eaglewings Kyokushin karate